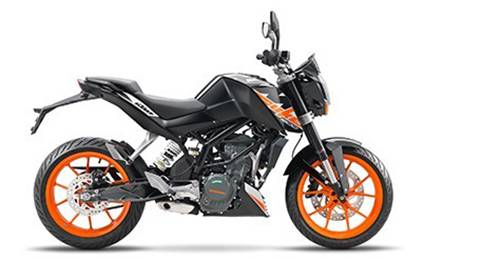 Austrian motorcycle maker, KTM, has been well known for its off-road bikes, and has often been leading at off-road motorsport events. Now since Bajaj has owned a good chunk in the European bike manufacturer, it is pretty obvious that all KTM models make their way to our market. The first-generation, 200cc Duke was first launched in our market in 2012 and created a lot of hype back then, with buyers flocking showrooms and waiting periods taking forever. It was a huge hit. A lot of Bajaj dealerships were gradually turned into KTM dealerships because both brands wanted their bike to be easily accessible, be it for purchase or regular services. The 200 Duke came with specifications that boggled the minds of Indian motorcycle nuts. While it may have looked lean, it was also aggressively-styled – and that made the bike hugely desirable among youngsters. All that sharp and angular bodywork made it look quite alien among all other Indian two-wheelers on the market, and tipped the scales at a mere 136kgs, making it the ultimate lightweight naked budget performance bike on the market. On top of that, its underbelly exhaust was seen for the first time on a bike of its type in our market.

In 2017, KTM decided it was going to bring out its all-new Duke twins, replacing the old ones. The new models offer sharper styling and come better equipped. However, this also means you pay much more. We tell you if the new 200 Duke has what it takes to better the old one.

The new 200 Duke looks nothing like its predecessor; in fact, it has taken inspiration from the 1290 Super Duke R and shares most of its styling cues and bodywork with the 250 Duke. The KTM 200 Duke features a new two-part trellis frame with a bolt-on frame that’s exposed. The overall design is sportier and more aggressive. The headlamp sports different decals and it doesn’t get the split LED headlamp found on the 390 Duke; instead it mimics the one on the 250 Duke. It is geometrical in shape and the digital instrument cluster looks like the one on the 250 too. Also, it gets orange wheels among other orange highlights. The tank is similar too, with all the slashes and sharp angles. The seat is longer and comes with a decent amount of padding as well. Unlike the other two Duke twins, the 200 Duke features an underbelly exhaust but sounds like all typical KTM Bikes, and gets more pleasurable to hear as the revs rise. We also love how the exposed tubes of the trellis sub-frame give the bike a proper, naked look. The tail section has a pointy edge to it and houses a twin LED tail lamp.

Swing a leg over the 200 Duke and the seating posture is exactly the same as that of the 250 Duke’s. Seat height has been increased to 830mm, while the foot pegs are more rear-set, meaning it isn’t as cramped to be seated on for long hours like on the older KTMs. However, short riders might find the heightened seat a bit problematic.

Fire up the engine and you’re bound to be stoked at how much quieter the bike is, which is sad in a way, because we liked the sound of the older single-cylinder unit. Refinement has improved – and this is instantly apparent the moment you start pushing it, with very mild vibrations filtering through. After having become BS6-compliant, the engine now makes lesser power at 24bhp and 19.3Nm of torque – this is also partly due the inclusion of a catalytic converter and a spark plug that can withstand more heat from combustion. It is not as aggressive to ride as before and seems more composed and planted. We managed to hit a top speed of 135kph and the new bike even features dual-channel ABS. On the track, the KTM 200 Duke feels light and nimble, and leans into corners extremely well, giving the rider a sense of confidence.

Let’s put aside the styling for a moment, because there’s so much more to the new KTM 200 Duke – like the improved refinement levels and its rider-friendly nature. It isn’t as much of a hooligan to ride anymore, but that’s good in way, because most riders take advantage of bike’s limitations. It is also more comfortable to sit on and will prove to be a great everyday motorcycle. Also, read the latest bike comparisons, only at autoX.

All About The Powerful Volvo FMX 440